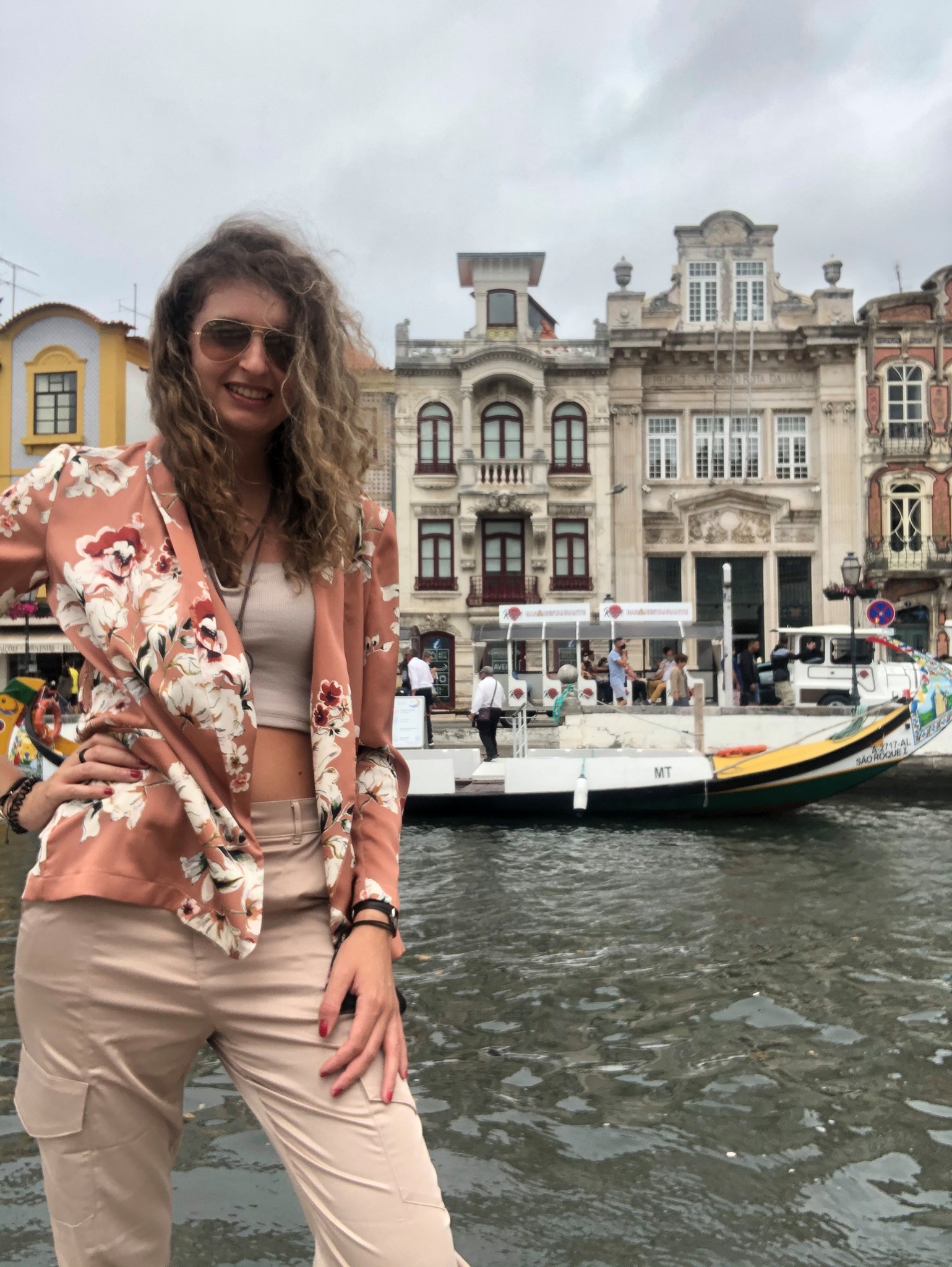 Traveling to Portugal in the summer 2020

Before to explain my trip to Portugal into detail, I am going to highlight facts referring to the new restrictions due to the pandemic. I’m a bit tired that the Pandemic has to lead the role of every conversation, plan, or travel. And also, that this blog has to make a space in any post specially to this extraordinary situation. Anyway, I know many people are still wondering about how is traveling during those times, and being this my second international trip since the pandemic began, I don’t care explaining important facts if those are going to be helpful to other people

(As always subjected to changes)

Fortunately Portugal doesn’t have any travel restriction regarding to the Pandemic. So, you can enter and exit the country without being checked at all. Also I believe it is interesting to highlight the fact that, I could encounter many more foreign tourists in Portugal than in Germany (my first International trip I made since the pandemic in July).

As Portugal doesn’t have restrictions and it is accepting all the EU countries, plus several third countries, I could find tourists from countries like Russia, and many diverse countries in Europe. Like: Spain (that was the predominant tourism), Italy, France (quite a lot also), German, Dutch, even UK. So it felt quite more pre-pandemic trip than in Germany.

The country, as per August 2020, didn’t make the use of face masks compulsory in the outside public spaces. Only in public transport and inside of stores and restos (I think that is the common ground of any country at the moment). Also, hostels in Porto, were OPEN, for my surprise. The day I arrived, I had the luck of meeting a dude from US and Israel (my most beloved country) who was staying in a hostel. And so he did invite me to join him and a group of friends who were staying there and even volunteering.

If you want to know more about Covid rules..

In the post about traveling to Germany, you can find that in the section about if “Traveling now is more expensive than before the pandemic”, I thought the age of hostels was totally over. And even if certainly feels quite different as hostels are only admitting 50% of its capacity, the traveler young vibe is still there, so not all the hopes are yet lost.

In any case, back to restrictions, If you want to have more detailed information about Portugal covid-19 rules or about any other EU country, you can just check my last post I wrote about “Where can I travel this 2020?”. 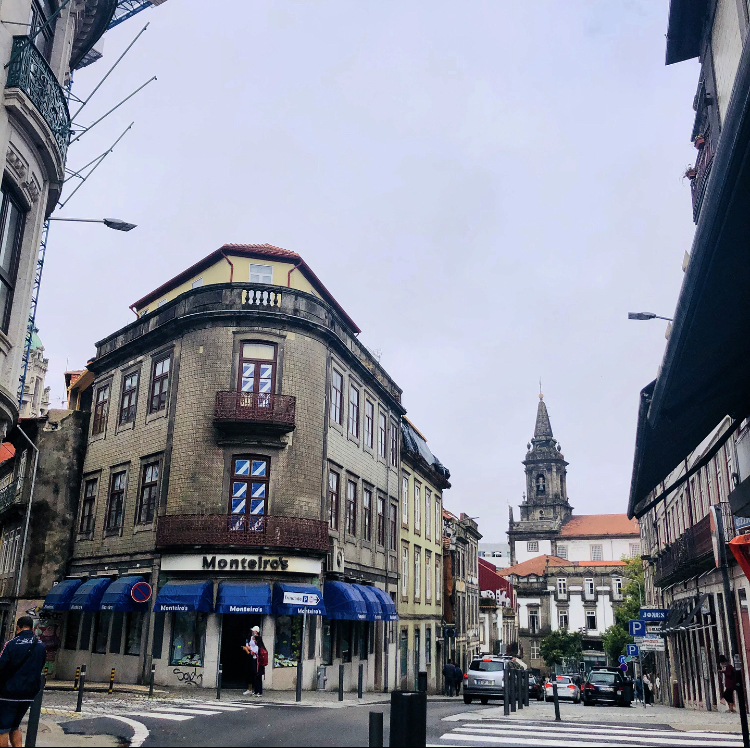 So as I was saying, hostels are again open, it was in my trip to Portugal were I could discover that fact. A part from the fact that now they only accept 50% of its capacity, for the rest it feels they have same vibe as always. Incredible people from all around the world (maybe not that much because of the restrictions, but almost) up to party, laugh, have deep conversations and a lot of fun. Unknown people that turn friends in just a couple of hours. So, if you are traveling to Porto this 2020, I can recommend you to stay at that place called “Nice way Porto”. It is really a nice way of enjoying your experience in Porto, if having fun is what you’re looking for.

What to do in Porto?

We need to take into consideration that this wasn’t my first time traveling to Porto, which it means I didn’t visit the main common spots you do visit whenever it’s your first time. That’s why I tried to discover more unknown spots and also its graffitis. During my trip to Portugal, I also wanted to explore nearby towns in the North, and have a taste of the gastronomy!

So, as I said, due that it was my second time in Porto, I visited again the most famous places and then tried to discover less touristic spots, Though, a must even if it’s your second time in the city is: 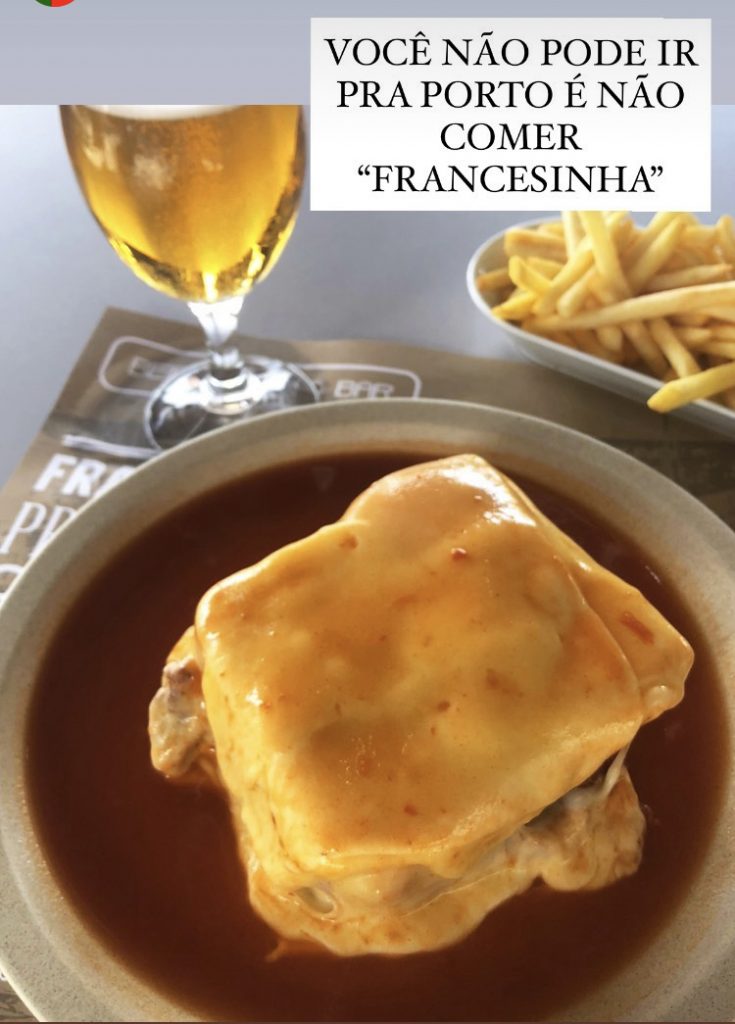 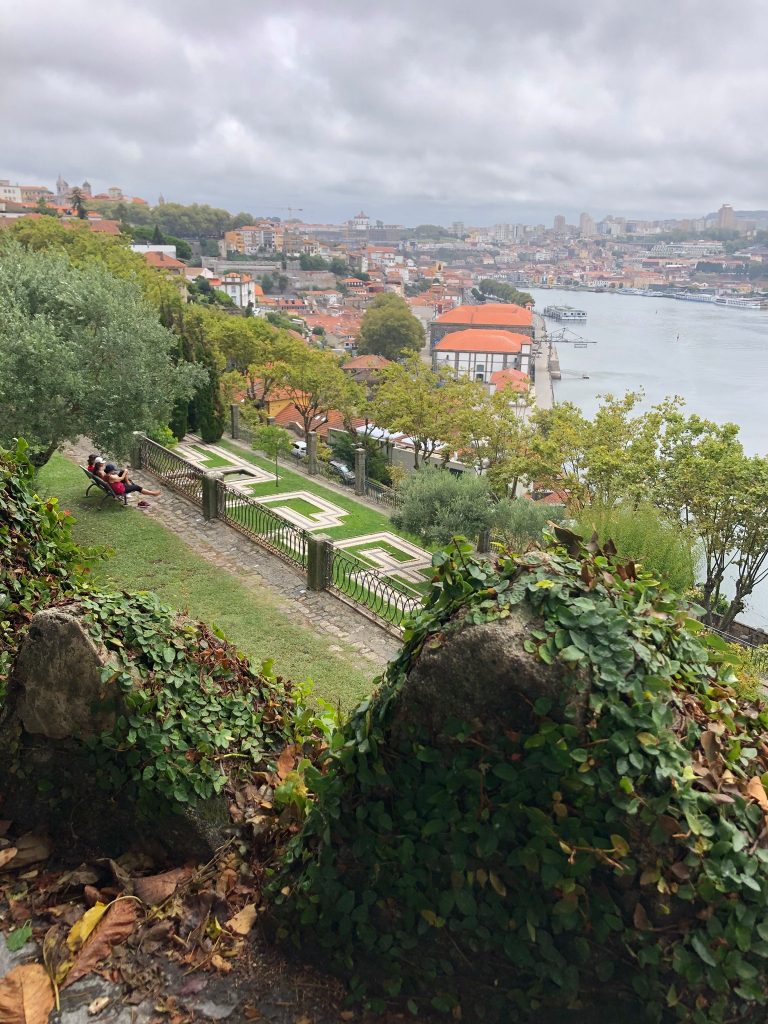 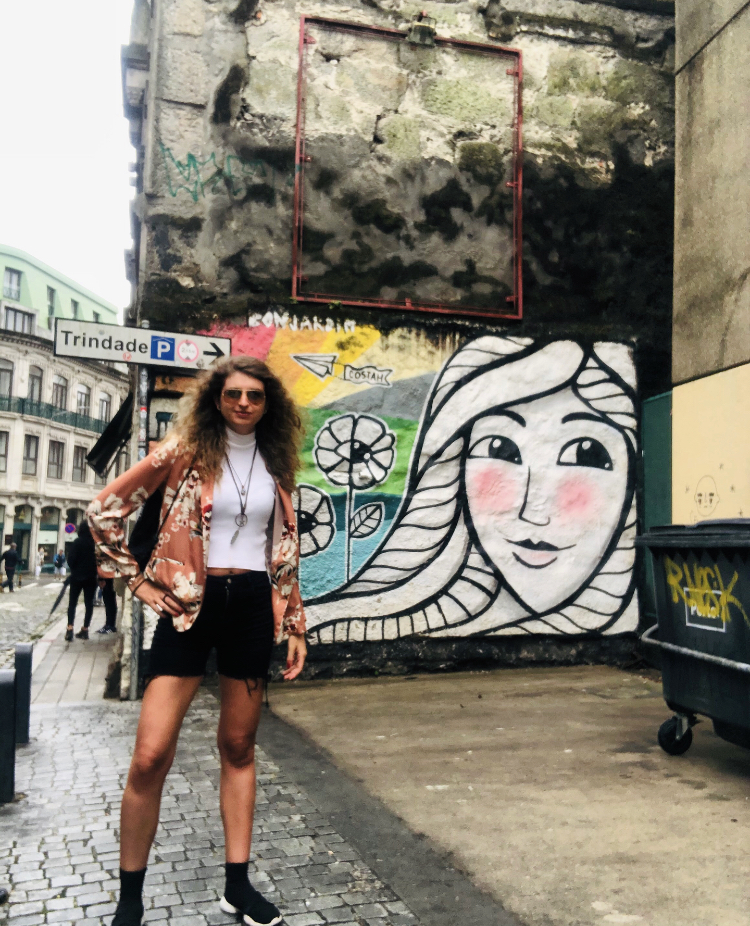 GETTING TO KNOW BETTER THE NORTH OF PORTUGAL

A day trip to Aveiro 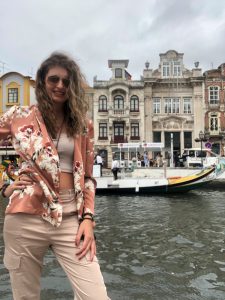 How to get to Aveiro?

Aveiro is a small city in the North of Portugal, at around 57km heading to the South from Porto.

All you need to do is to take a train from “Estação São Bento,” one of the main train stations of the city, and buy two ways ticket to Aveiro that cost 7.5€ (to go to Aveiro and to head back to Porto).

What to do in Aveiro?

During my trip to Portugal, I wanted to extend my discovery around the Porto’s region. In order to do that, I decided to head to several historical nearby towns like Aveiro. Aveiro is a city placed in the North of Portugal, few km heading south from Porto. Is known by its multiple canals and beautiful coloured houses. Some, will call Aveiro like the “Portuguese Venice”. And it actually looks pretty similar. You just need to look at my pictures and notice how similar Aveiro is to Venice. Besides this fact, here I’ll start quoting my set of recommendations whenever you visit this cozy town.

1)Once you get out from the Train Station, walk down the street all the way until you start reaching the first canals. There you’ll see the first boats giving tours around filled with masked tourists (not because of carnival, but you know, covid-times). 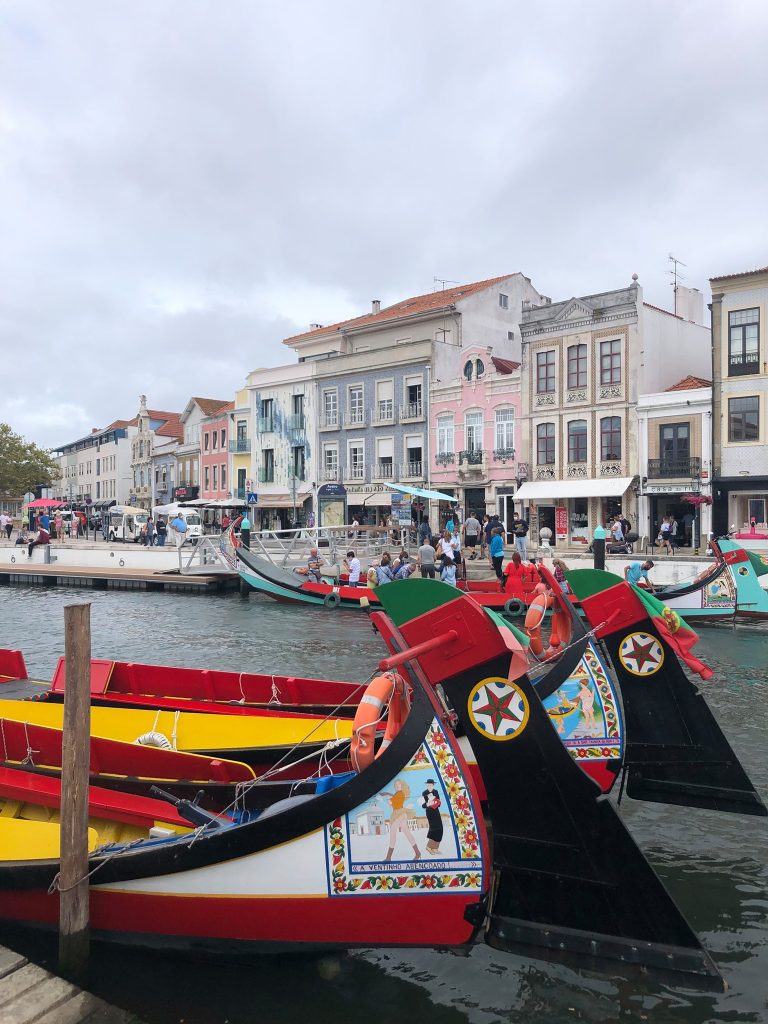 2) Take nice pictures there, and keep walking. You can get to the two sides of the city centre.

-The one that is filled with more restaurants and people,

-And the other which looks more quiet, and it has the House of the Portuguese Language, a visible remarkable building. I got lost around that side of the city, finding places like the picture showed below with nice graffitis, and also nice restaurants.

3) Eat in a Restaurant called “O Adriano” (my name in its masculine version).There they serve delicious ‘Bacalhau Grelhado com Batata a Burro’, that is a “Bacalhau” or codfish in English (a typical fish from Portugal) served with delicious potatoes, garlic rings and coliander herbs. The price of half-ration of this dish equals 8.5€, which is really cheap. You can also take a typical Portuguese vegetable soup, served as a main course and that only costs 1€.

I also asked for wine, is really a “must” whenever traveling to Portugal, as Portuguese are big wine producers, and they make all of their dishes to combine really well with a good cup of wine. In total, I paid 13€ for the whole meal. Very affordable compared to many other European and even worldwide countries.

Though, I MUST WARN YOU that restaurants in Portugal, will charge you an extra 2-3€ to your order for the side dish of olives and white bread they will serve you without you asking them to do. So, if you are not up to pay a three soups price on olives, better to tell them to not bring it to you. Or better in Portuguese, “Não, obrigada/o”. ☺️ 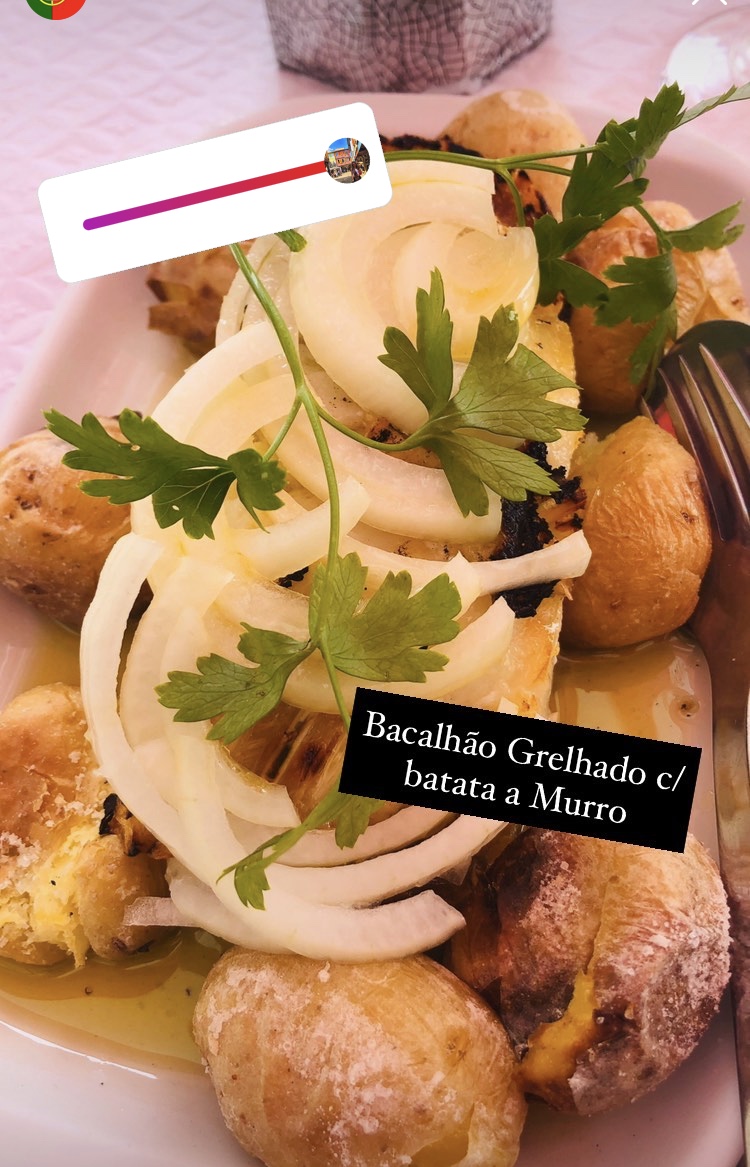 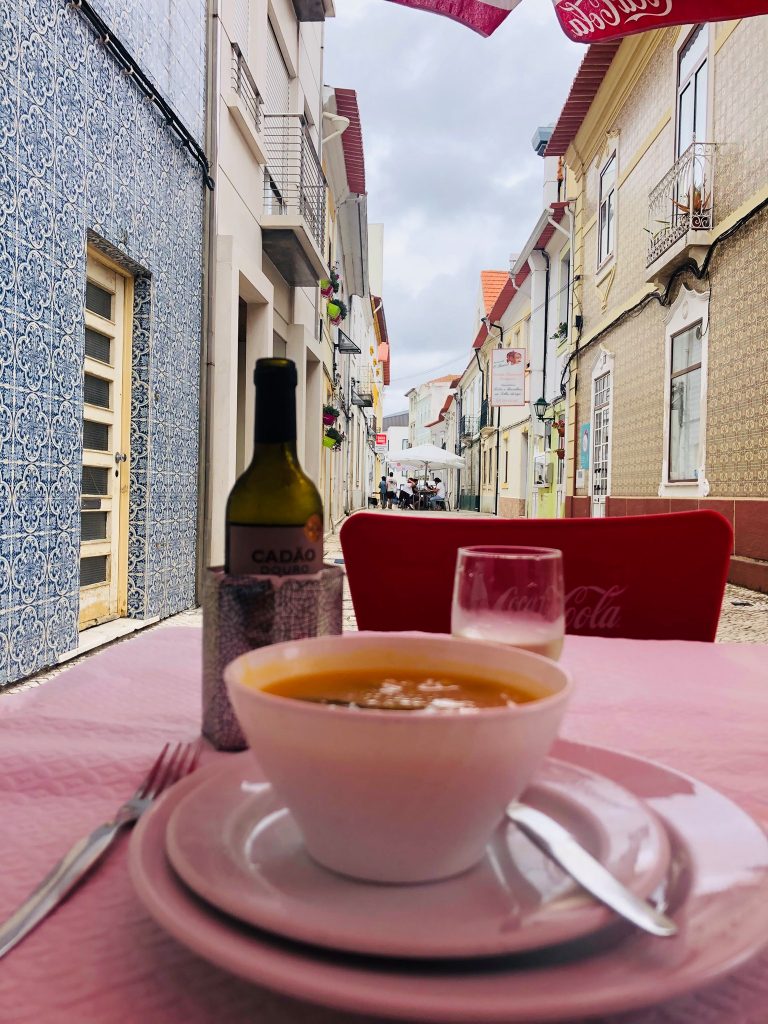 4) Try the delicious sweet ‘Pão de Ló‘ in ‘Confeitaria Peixinho’, a very typical fluffy cake from the Aveiro region. Its texture is pretty unique, like you can eat it with your hands, but you’ll notice is not a 100% solid cake, so it might get hooked into your fingers. It costs 1.8€ per piece. 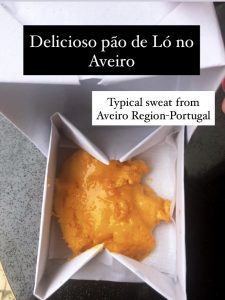 A day trip to Guimarães

As I said before, during my trip to Portugal, I did not pretend to only visit Porto but to expand my vision of that region in the meantime. Saying that, another beautiful and historic village you must visit if you are staying for few days in Porto is Guimarães. The city is placed 54 km heading Northeast from Porto.

How to get to Guimarães?

Like in the case of going to Aveiro, you just need to take a train in “Estação São Bento”. The ticket will cost you around 7€ both ways, and the journey will last around 1.30h.

What to do in Guimarães? 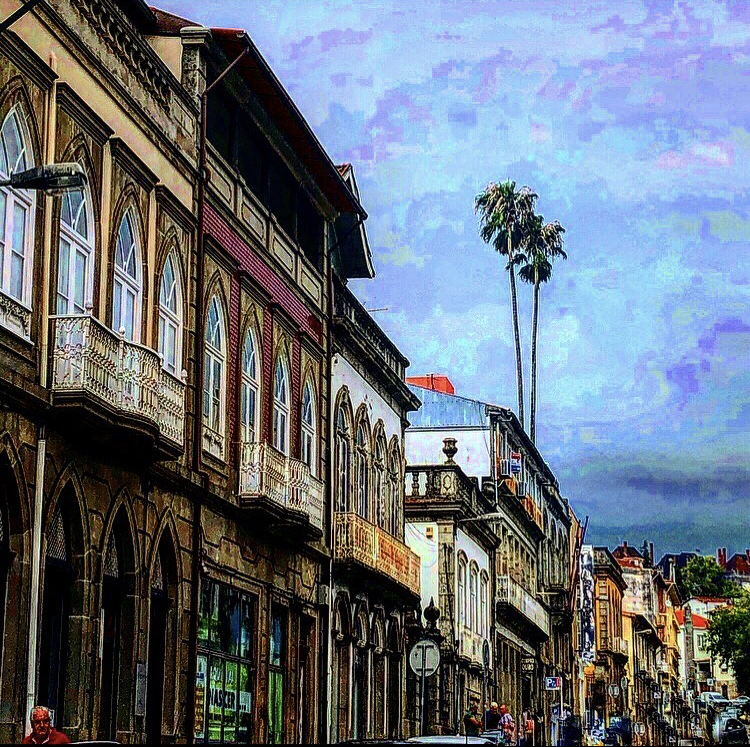 The city of Guimarães, is specially interesting of visiting, due to its history. It is considered to be the place from which Portugal as a country emerged, as it was the first capital of the country in the XII century. It is because of those facts that the city of Guimarães was declared UNESCO World Heritage Center.

What you can do is start your day walking down to the city centre/old town from the train station and:

1) Visit  Guimarães castle, or at least if you are not entering, see it from outside as it is a really medieval castle with beautiful surroundings and views.

3) Walk through the old town, including the “Largo da Oliveira”, and its church a ‘Igreja de Nossa Senhora da Oliveira’, a collegiate Church classified as a National Monument.

4) Eat at “Silva” ( a restaurant placed next to “Largo da Oliveira“) the delicious speciality main dish called “Frango na Pucara” that is a Portuguese dish consistent of chicken served with coriander, potatoes and some sort of wine sauce on top, served on an iron pan. The dish costed 10€. Pretty cheap as well considering that the restaurant was placed right in the middle of a touristy spot of the city.

5) Visit the museum called “Casa da Memória de Guimarães”. This museum offers you a broad perspective of the oldest traditions of the place, from the typical celebrations and clothes, to the way fo being of its people and as well as the foundation of the city. It only takes an hour of visit, and with some sort of discount (including student) you can enter only paying 2€. Otherwise you’ll pay 3€. Still very cheap and culturally interesting.

Dishes and food you should eat in Portugal

1) Bacalhau Grelhado com Batata a Burro. As I said before, this codfish is served with potatoes, sliced raw onion rings, and some coriander. Half portion (that is already huge for only one person) costs 8,5€. Place of origin: Aveiro.

2) Francesinha acompanhada de batata frita. As I said before, the ‘Francesinha’ is a sandwich served with ham, meat, sausages, covered with cheese, an egg and a spicy tomato sauce. You can eat it pretty much in every restaurant around Porto. Its price could range from 7€-10€ depending on how touristy the spot you’re eating in, is. Place of origin: Porto.

3) Sandwiche de vitela. This is a Sandwich served with sliced parts of calf meat. It’s served cold. Costs around 5-6€. Place of origin: Porto.

4) Frango na Pucara. I also explained this dish, it’s made from chicken, with a wine sauce, bread slices, some herbs and boiled potatoes. Its price: 9-10€.Place of origin: Guimarães.

6) Pastéis de nata. Also known as ‘Pastéis de Belém’, they are originally from Lisbon, but you can find them in almost every bakery in Portugal. Its price: 1.2€/cake.They’re small cake filled with cream. Place of origin: Lisbon.

7) Lanche mixta. There’s nothing special about it, it’s only the name that refers to some sort of milk bread filled with ham and cheese. It’s price: 1€. Place of origin: all around Portugal.

I hope you liked this complete guide about North Portugal! 😁

If you liked this post about my trip to Portugal, please follow me on my social media account where you’ll find more info about my trips, more content and also keep reading my blog for more!!

A trip to the “city of love” also known as Paris, in COVID times.